The questions put to Kate McCann...

Below are the questions put to Kate McCann during her interrogation by the Portuguese police in September 2007.  She refused to answer all questions but the last.  Many people excuse Kate's silence on the advice of her lawyer, however Mr McCann did answer questions put to him.
Please note... you do not need to have been physically in Portimao police station with Kate McCann to have knowledge of the above questions. You do not need to have been a tiny fly on the wall to know that she did not answer any of them.  This information is well known and has been freely available online for many years - it is still available to view on many news websites, click here to view on BBC News.
If you didn't know this, why not?  Maybe reading the translated official police investigation files would be a good start... McCann PJ Files.
Posted by Me, Myself, Moi... at 11:48 5 comments:

I've tried hard to write something positive regarding this case.  The only thing I can come up with is that Madeleine appeared to be loved and cared for in the majority of the photographs we've seen of her. However, I just cant get past the itinerary that the McCann children followed on that fateful 'family holiday'.
It made me think of my own family holidays and in particular the Isle of Man, the 70s when I was the same age as Madeleine.  This was a family family holiday, my parents were most definitely there to enjoy themselves - they had worked hard and earned that break.
I was never left with anyone.  I was never left alone.  My parents holiday was my holiday too.
I remember the clippetty clop and horse smell as we travelled in the horse-drawn tram along the prom, the sunlight shimmering on the pebbles as we rowed our boat in the crystal clear sea.  Every day we collected shells and trawled the beach.  I remember laughing at my acrophobic Mother as she struggled to get past the first flight of steps up to the Laxey Wheel and screaming at my Father as I took my first horrifying donkey ride.  Eager anticipation as I looked out the window of the electric railway, as we travelled all the way to the tea-room at the top of Snaefell... and the customers shouting in unison SHUT THE DOOR as I opened it to see Manannan's cloak of mist and several sheep trying to get inside.  I remember dragging my parents again and again to the rock shop, to see the masters at work creating... sticks of rock, then insisting on visiting the bakers next door for the biggest scones ever with the plumpest yummiest raisins.  The whole place was magical and colourful... full of fairies, enchanted bridges, beautiful gardens, painted walls and gnomes peering out everywhere I looked.  To this day I still say good morning Fairies whenever I pass under a archway of trees.
And every night as I was tucked into bed, I didn't say I had the best day ever.  I said can we do it all again tomorrow.  Four year olds don't appreciate what they've had... they just want more, more, more.
To a much lesser extent, the holiday did have its disastrous moments. Thanks to stupid 4-year old me...
I was sitting at my parent's feet, making sandcastles when I saw the sunlight glint against the broken bottle.  I got up to look - I knew it was very dangerous and definitely shouldn't have been there. But I wondered just what it would feel like to stand on it...  I circled twice before plucking up the courage to put my foot down.  Luckily my Father was there to scoop me up in his arms and as he ran towards the policeman in white directing traffic, I could hear my hysterical Mother in the background. Blood everywhere... I've still got the scar.  I remember marvelling at the policeman's white gloves but I can't remember being told off, maybe I blocked that part out... as a child does.  I do remember raised voices about the dirty animal who left the bottle there in the first place...
No creche, no high tea with strangers, no time alone.  A proper family holiday.  Despite being under the watchful eye of my parents, I still got into trouble.  Four year old children have no real sense of danger, no boundaries and an absolute dogged determination.  Is there any question to why people wonder what a child could get up to being left to their own devices.  And how anyone could call it responsible parenting? I'm thankful to my parents for such great memories, I wonder what the McCann children think of theirs.
Posted by Me, Myself, Moi... at 16:35 4 comments:

Two women put pen to paper.  Same subject, same audience.
The women in question are criminal profiler Pat Brown and maternally bankrupt Kate McCann.  They are both writing about a missing child, Madeleline McCann.
Whilst Ms Brown's book promises 50% of sales will be donated to her own Madeleine search fund, the royalties from Mrs McCann's book will go to their own private search for Madeleine.  It will be added to the golden pot of the McCanns private limited company, Madeleine's fund as soon as the advance payment for the book has cleared.
Despite being something which is advertised as a totally transparent fund to search for a missing child, the Madeleine Fund : Leaving No Stone Unturned is really a mystery and the actual 'search' has always been a gaping black void to the outsider.  With the amount of well wishing donations received, it is only fair that regular updates should be provided.  There have been none.  We only hear of a name... Edgar. Bizarre sightings and McCann court actions are the only news we hear. The McCanns never physically searched Praia de Luz like any normal parent would and they've never searched since.
On the other hand and true to her word, Pat Brown has flown out on a two week visit to Portugal.  She will travel to Praia de Luz and spend the time using her professional expertise as a criminal profiler to analyse the case in situ.
Pat Brown is doing what we would dearly love to do, and something that Mr and Mrs McCann have asked... search for Madeleine.  She really does not deserve the abuse she has been subjected to by supporters of the McCanns.  I wish her every success on her trip and hope she really does turn up that missing piece of the infamous jigsaw.  If she doesn't discover anything, well at least she tried...
Two women put pen to paper.
Same subject.
Same audience.
Different aim.
*****
Pat Brown on what she hopes to accomplish in Portugal.
Follow Pat on Twitter and Facebook for regular updates.
***** 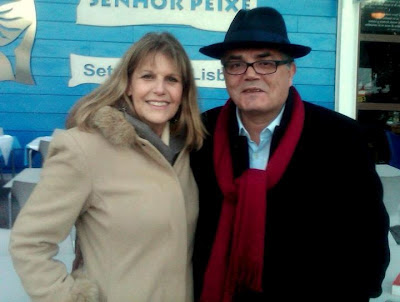