Dr O - conspicuous by his absence...


Madeleine suspect accused of lying in confrontation with family friends

Earlier this month doctors Russell O'Brien and Fiona Payne, along with another friend, Rachael Oldfield, flew to Portugal to be questioned.  The meeting was arranged after members of Kate and Gerry McCanns' holiday party expressed doubts over the ex-pat's alibi.

As part of the process in Portugal, witnesses can challenge a suspect when there is doubt in the statements.

The friends claim they saw Murat, 33, on the night of 3 May when the four-year-old was snatched from her bed in the family's holiday apartment in Praia de Luz, Portugal.  The three key witnesses in the case are certain they recognise the suspect because of his distinctive lazy right eye caused by a detached retina.  One claims to have spotted Murat peeking into the McCann's apartment that night - which could destroy his alibi for the 3 May.  Murat insists he was dining with his mother before going to bed early.

Mr Murat's spokeperson, Tuck Price, says: "Robert found it traumatic. He could not understand how these people could sit there and accuse him of lying.  "It all seemed to revolve around them recognising his dodgy eye. "It was dark. How could they have seen?  Besides that, he was not there anyway."

In a leaked police report, Dr Payne and Mrs Oldfield claim they saw Murat at the Ocean Club resort at around 11.45pm.  Murat was spotted again - this time at 1am by Dr O'Brien. 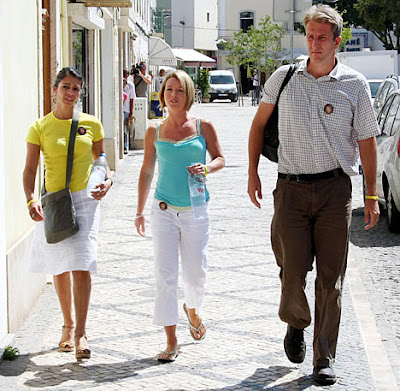 Robert Murat is going to prosecute two friends of the McCann couple for perjury in a confrontation ordered by the judge.

Francisco Pagarete, Murat's Lawyer, does not know the evidence that the English gave during the investigation. However, he was present at the confrontation that - months after Murat had been constituted as arguido - was done between his client, Rachel Oldfield and Fiona Payne. The lawyer guarantees to SOL: "They lied in front of us, with the clear intention of incriminating my client".

Pagarete explains that, as soon as the case ends being under the secrecy of justice, he is going to consult 12 thousand pages of the process to find other evidences: "According to what I read in SOL, it was a British journalist who did the first accusation to the English Police. I will check if that is in the process".

I wonder what was said during that confrontation and why did Robert Murat make the decision to sue only two of the McCanns' friends (Payne and Oldfield) instead of the three that were present?  Did Dr O'Brien recant his accusations and indeed, could he be one of the friends who reportedly changed their statement?  Is the case still going ahead? Questions, questions.  Dr O'Brien has kept a low profile since - he was the only member of the group of friends not present on the High Court steps when the group accepted the out of court settlement from a number of newspaper groups.  His partner, Jane Tanner appeared in the McCann documentary alone. 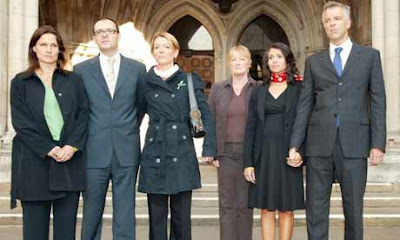 In an interview Flash magazine conducted with Susan Healy, a source claimed...


At most the house in Rothley is visited by close family and three others of the group of seven friends who were with them in the Algarve when Maddie disappeared, that is David and Fiona Payne and Jane Tanner, as they are connected with them.