Who can say what the mum of a missing child should look like?

Curiously, there are plenty of photographs that could come under the heading of 'weird'.  Plenty of happy smiles with their other children, but none of them searching, asking, looking...  This is what we see, it's out there in the public domain for us to draw our own opinions on.
So what should the mother of a missing child look like?  My expectations would be a devastated wreck, but who can say? We can question whether it's normal to function and show all the wrong emotions.  Calm, beaming smiles from a woman who managed to co-ordinate her personal grooming from day one - right down to putting her earrings in.
After watching her husband storm off set during the Spanish interview pictured below, I did think Mrs McCann acted as cool as a cucumber, which certainly opened my eyes. 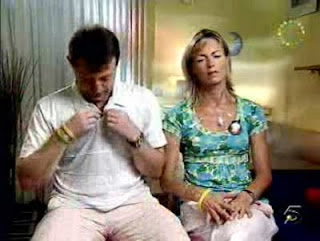 However, to date I've never actually viewed her as 'cold'.  Not until it was so succinctly put by Mrs McCann herself, and pictured by the Express... Instead of raging yet again at the unknown, perhaps she should question why people hold this view... 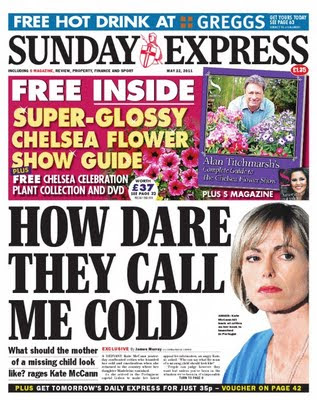 And perhaps, just once, the headlines could be about her missing daughter and not herself.
Posted by Me, Myself, Moi... at 14:47