I watched a video the other day - Gerry McCann justified the spending of fund money by claiming they employed a team of private investigators that was led by one man, Dave Edgar.  Turns out that the team consisted of just one man, one leader.  Crowley and Edgar.  And they've not been employed for months...

Yep, according to the Sunday Express...

Kate and Gerry McCann are no longer employing private detectives to search for their missing daughter Madeleine.

The Sunday Express understands the McCanns stopped using former police detectives Dave Edgar and Arthur Cowley some months ago when their contract ran out.

So, how long is 'some months'?  How long is a piece of string?...  Did their employ end when the review started?  If so, that's a little more than 'some months'.

The 'source' felt the need to tell us “there was no fall-out.” and that they felt the search should be left to Scotland Yard.  They said there was no fall-out when Doug Skehan and brother, John McCann (directors of the fund) also departed.  Oh, how abandoning ship is done on such good terms these days.

If the McCanns are not funding a search for Madeleine, why then are they still asking for funding to search on their Official Facebook page?  In fact, they've specifically pointed out that they've made it easier for the gullible to donate when buying things from their online store.  How kind. 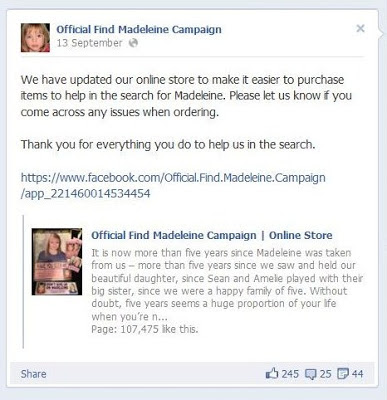 High time this 'fund' and private investigation was scrutinised once and for all.  The public should be made fully aware that this is the McCanns' own private company of which they sit as directors and decide how the money is spent.  If they want to boost their balance, they should do what every other owner of a small business does - damn well work for it. Their 'business plan' should be laughed into next week.  Unfortunately it isn't, and the naive and gullible really believe they are funding a search for their daughter.  A daughter they didn't even look for themselves.

Pointed out on Twitter this morning - how can the McCanns' search be hindered by the publications of Goncalo Amaral and Tony Bennett when there is no funded search or investigators?  True... their claims have no standing in court and it would appear that the McCanns themselves are hindering their own search by not renewing their own investigator's contract.

Are the McCanns searching themselves then?  Nope, everything is hunky dory as they holiday in Ireland.  Edgar's wages didn't stretch too far, did they? Apparently they're residing in a remote cottage somewhere.  It must be some distance to the nearest pub, let's hope history doesn't repeat itself.

I lost my friend.

And although I know she's at peace and not in any more pain, my selfish heart is broken. 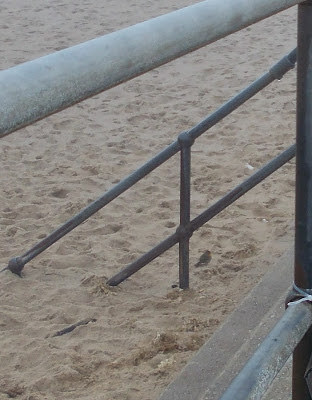 The day of the funeral suited our moods - grey and dank.  It was also very foggy.

Luggage dumped, we made our way to the prom.  That first sight and smell of the sea would bring me closer to her.

But despite being by the coast, the fog blotted everything in the distance - we could only hear the waves crashing.

As I stood by the railings, a robin appeared at my feet, its red breast illuminated in the cold air.  It hopped onto the sand and scurried off, stopping and looking back as I followed.  As I neared, it scurried off again.  I got my camera out of my bag and tried over and over to take a snap but each time I did, it turned its little head away.  This continued all the way up the prom with me in pursuit... scurry, turn, wait... scurry, turn, wait.  Right to the end of the prom, where it flew off.

I was heartened at such a bizarre sight... a robin on the beach?!

The following day, with heavy hearts, we made our way to church. Arriving early, we decided to have a look around and as I made my way through the eery mist surrounding the old headstones, what should land at my feet?  A robin.  It flew upwards, then from tree to tree.  As it did so, a shimmer of autum leaves fell to the floor.  A truly magical sight.

The fog lifted slightly as we laid my friend to rest and the sun tried to make its way through the cloud.  It was a sad occasion, as you would imagine.  We made our way to a little pub to celebrate her life and guess who came along with us... the robin.  It sang its heart out before flying off into the mist.

I won't even consider a skeptical point of view, I believe that little robin appeared to put a smile on my face.  Just like my friend always did.

As well as being a wonderful, kind hearted woman, my friend was a great advocate of justice for Madeleine.  She contributed long and hard over the years in the search for the truth.  Not only a sad loss for her family and friends, but also for Madeleine. I hope she now knows the truth.

So long my soul sister... you are at peace now.  An enigma to many, but not to me.

If only... a luxury that cannot be afforded.

An article popped up in the Daily Wail last week, entitled 'If only...' and compared the missing April Jones case to the McCann case.

I'm not sure what Kate's if onlys would be...

If only we'd booked 4 individual tables to accomodate high chairs and prams, instead of booking a table solely for 9 adults.

There really is no comparison with the two cases.

A five year old playing out with her friends in a familiar place while her mother made her tea.

A four year old left alone with her younger siblings in an unlocked apartment, in a strange country while her parents drank and dined with friends.

A sad part of this case is that April was allowed an extra 10 minutes play as a reward for a glowing school report.  Are the Jones' if onlys expected to include...

If only we hadn't praised her?

There's no doubt that both these children would still be here if they'd been under adult supervision, however in April's case it appears a malevolant threat was there all along - not a 'high risk strategy' or 'window of opportunity'.

Yet the difference is monumentous - after 5 days April is dead... after 5 years Madeleine is missing?

We don't know what leads Dyfed Powys police have to believe that little April is not with us any more but I will have a tiny glimmer of hope until she's found.  Something I've never had for Madeleline.  Sadly.

My thoughts are with the family at this very difficult time. 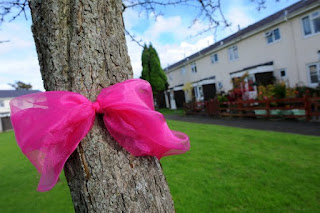 I can't say I'm surprised that the Savile shit has finally hit the fan.

I'm sorry that his victims have had to wait for this moment in time to finally be taken seriously and believed.  Women, whos lives have been likely destroyed by the perverted ways of a so called 'television icon'.

What makes it more apaulling are the number of apparent media dahlings jumping on today's bandwagon, who apparently knew for years that there was 'something sordid' going on.

In today's news, Esther Rantzen refers to there always being 'rumours' and 'gossip in the office'.

Paul Gambaccini says he's 'waited 30 years for the allegations to come out'.  He also claimed that all the tabloids had pages set up, ready to reveal the sordid truth and that Saville used his charity work to prevent the abuse being exposed.

I'm sure the victim list will grow and I hope the upcoming expose encourages his victims to come forward and receive help.

I dread to think of the number of people who had an inkling of what was going on and turned a blind eye to it, despite children being involved. Public figures, celebrities and every editor/journalist of those tabloids who put newspaper sales above the safety of innocent children.  These are the people who should be thoroughly ashamed of themselves, and should hang their heads in shame.  I don't know how they sleep at night.  Their silence allowed this abuse to continue unchallenged.

A national treasure, more tainted by the day.