Michael Wright stated in evidence that young 'A' had searched for her name in Google.  I thought I'd give it a try...

Obviously, if her parents hadn't put her in the position she is in - she would have found nothing.  However, here's what she would have found before the trial... nothing too extreme, some nice Youtube videos - certainly nothing relating to Goncalo Amaral's book and dvd. 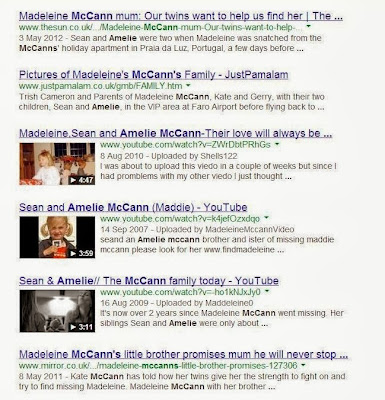 And after her parents objection to Amaral's request for media silence - here's what she would find today... 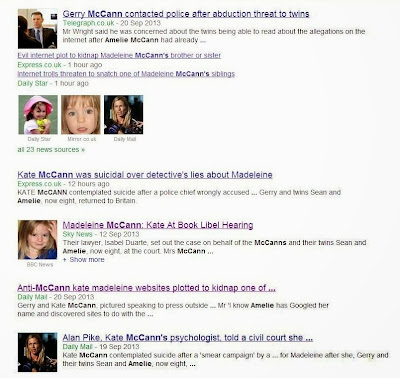 Scary stuff and the really diabolical thing is that all these articles and reports are online because the McCanns wanted it reported.  It's absolutely crazy that they would do this to their own children.

For their sake (and while they can), the time has come for the McCanns to simply take a back seat, shut up and get on with their lives.  Instead of persistently whining and stirring up their own hornet's nest, they should sit their children down and explain the full circumstances of Madeleine's disappearance (yes, their version of the truth).  It surely can't be scarier or more horrific than anything they'd see in the local newsagents or hear on the playground.

It would also be helpful to explain that because Madeleine's disappearance is so strange and unexplained, many people have doubts and their own dark thoughts about what actually happened.  There are full translations of the PJ Files online and many, many things worse than Goncalo Amaral's book.  Eight year olds are a lot smarter than we think and it would actually be better for the twins in the long run.  The inevitable is going to happen and the danger is everywhere - not just online.  And certainly not in the guise of the man who tried to discover what happened to their sister.

Don't you just know it though - it ain't gonna happen.  Not in narcissistic McCann Land.

And whatever next?  So far, their witnesses are hardly credible - consisting either family, friends or paid lackeys.  Where are all the independent health professionals and assessment reports relating to this sad state of affairs?  Hardly inspiring, eh?
Posted by Me, Myself, Moi... at 00:10 9 comments:

McCanns - Crap Parenting... then and now.

I'm sorry to say it, but yet again the McCanns style of parenting is being called into question after revelations during their recent court action.

Yesterday's snippets included details of Kate's dark and suicidal thoughts.  Today's told of a bizarre kidnap plot threaded in the 3As forum.  I won't detail any of these crazy tales as they're not worth the bandwidth however, I will say that I was a member of that particular forum from day one, and do not remember any threats to the safety of the McCann children.  If I had, I would have reported it to the police myself, as I'm sure anyone else would.

Goncalo Amaral initially requested that the case be heard in private with no media presence to 'preserve the memory of Madeleine' - the McCanns objected and wanted everything heard and reported.

What kind of parent would want such awful, horrible things about themselves reported and tweeted live from court, then emblazoned on the front pages of British newspapers?

Do Kate and Gerry McCann?  Do they even remember that they are parents?  Gerry referred to leaving children home alone whilst eating and drinking with friends at the Tapas bar as 'responsible'.  Do they even know the meaning of the word?  Any 'normal' parent would think hey we can't let this stuff get out, the kids would be horrified'...

These gruesome parents should be hauled over the coals for allowing this to happen and even more so for objecting to Goncalo Amaral's request for media silence.  Their whole case seems to be in defence of what the twins may or may not see and hear now and in the future. From what we've heard so far from the McCanns own witnesses, they'd have been aswell inviting the twins along sit in the public gallery.

Hopefully this is something that will also puzzle the judge.

I've not posted much lately on the case, however I have been around.

I thought that Goncalo Amaral's reason for keeping the media at bay from the libel trial were worth a mention...

To preserve the memory of Madeleine

Those words have left me with a lump in my throat and a tear in my eye this morning.  Yet again, a stranger has shown more feeling and respect for Madeleine than that of her parents.

I hope this trial makes it clear to the general public just who the callous money-grabbers really are.

Good luck and may the best man win.