The Marathon and a Spin Too Far?...

I wasn't going to comment on the 'threat' issue, as so many people appear to have had their eyes opened, but my other half insisted.  And as Hideho has compiled one of her great videos, it's worth sharing and explains it all.

I will say that in the almost 6 years that I've followed this case, I've never once seen the McCann twins threatened from either side of the fence or elsewhere.  I just don't believe the article in the Star at all, I think it's a total fabrication.

Kate McCann, however, has once again put her own children directly in the firing line.  Speaking to Lorraine Kelly the other morning, she described how her children would be at the finishing line of the London Marathon, cheering her on.  Which is quite right and normal, however she failed to mention any of these bizarre, mortal fears or threats which is very strange.

The twins are now 8 years old.  They can read - they only need to catch a glimpse of that headline to ignite fear in their little heads.  Like on the garage forecourt when their mother leaves them twiddling their thumbs in the car.  They have friends who can also read - whispers on the playground are inevitable.

What on earth were the McCanns thinking?  It's utterly disgraceful.

The twins are innocents in this whole affair.  Why anyone would want to target them is completely beyond me.  And you know what?  Nobody does. It seems to be just yet another part of the wider agenda and is a spin too far.

Good luck to Kate McCann in tomorrow's run... I hope she finishes despite her recurring foot injury.

In her latest quest for martyrdom, she has well and truly put her foot in it.  Instead of vowing passionately to never, ever rest.  To hunt this monster down until her dying day and make him or her suffer, she simply forgives. Huh?!...

Strip away all the Christian and counselling 'forgiveness and move on' rubbish - you are first and foremost a mother and  this is her daughter. Her precious first born.  Who, in her own words, may have been taken by a paedophile.  I won't repeat page 129, but how on earth could anyone forgive that?

Mrs McCann claims to have no idea where Madeleine is, what she is going through right now or even if she is still alive.  Yet she can forgive?

Never mind the Portuguese police, Scotland Yard and normal members of the public who are all looking for her daughter.  Never mind the donations, reward money and aid they've received.  Never mind the endless pot of money that's been thrown into the search and investigation.  Never mind the fact that many people have followed this case for 6 long years (or however many years!!!), hoping for nothing but justice for Madeleine and for her to be found.

We're not all internet nutters, sitting behind a computer screen, typing abuse.  Some of us are parents and simply feel that the victim in this case is not Mr or Mrs McCann, but little Madeleine herself.  It's not up to Kate McCann to forgive anyone, it's Madeleine who should be forgiving.

Right enough, it all becomes irrelevant when you learn about Eddie, the cadaver dog and the many places where he sniffed out the scent of death.

Please visit HideHo on Youtube for more videos and insight into this bizarre case.

A detailed look at the events that unfolded during the early days of August when the specialist British sniffer dogs, Eddie and Keela, arrived in Portugal.
Posted by Me, Myself, Moi... at 11:06 10 comments:

Six years after her daughter Madeleine disappeared, a weary Kate McCann still clings to the hope that one day she will be found. 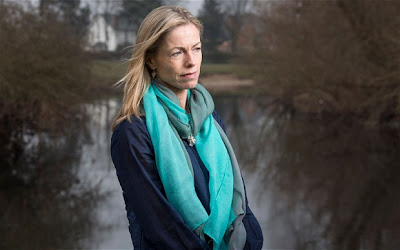 Kate McCann did something frighteningly normal the other day.

She stopped at a petrol station, filled up, locked the car and went in to pay, leaving her eight-year-old twins, Sean and Amelie, strapped in the back seat. As she stood anxiously at the till, they pulled faces at her through the window.

Read more frighteningly normal and bizarre at
The Telegraph

“There are moments when you despair, but they are infrequent now.
As someone said : It’s not that your burden gets any lighter. It’s just that your legs get stronger.  That really sums it up.”

Never a truer word spoken... six years of running, looking over your shoulder makes for very, very strong legs indeed.  And THAT burden will never ever get any lighter.  Never.